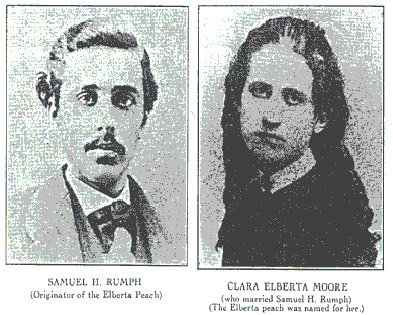 On his grandparents' plantation, Samuel Rumph was surrounded by almost every kind of fruit that would grow in this climate. In this orchard with his grandfather, young Rumph acquired a knowledge and love of horticulture. As a teen, he managed a plantation of his own, on a part of the land originally owned by his Grandfather Rumph. He soon began to experiment with fruit trees, and planted an orchard.

In 1857, Mr. I. C. Plant, purchased an assortment of selected varieties of budded peach trees, known as 'Chinese Cling,' 'Early Crawford,' 'Late Crawford,' 'Old Mixon Free,' 'Tillotson,' and 'Stump the World'. Mr. Plant sent these to Colonel Lewis Rumph, Samuel's grandfather. These were set out in the family orchard near Marshallville and the trees grew to be large and prolific. The 'Chinese Cling' bore particularly beautiful fruit. The seeds from it were saved by the elder Mrs. Rumph and were given to her daughter. They were planted in 1870, and from these grew one particularly beautiful tree which bore an exceptionally fine yellow freestone peach.

In 1875, when Mrs. L. E. Veal, a former college mate of Mrs. Rumph's, was visiting at Willow Lake, Mr. Rumph was exhibiting to her one specimen after another of peaches. Finally, he brought out a clear seeded peach with yellow flesh and a crimson blush on its cheek. Loud were the exclamations when it was shown. Mrs. Veal asked its name. He replied, "It has no name. It is my origination. I want you to name it." Whereupon Mrs. Veal said, "Well, let's honor your wife and call it for her. You'll never have anything to surpass it on this continent. Elberta is its name." The maiden name of Mrs. Samuel H. Rumph was Clara Elberta Moore, the daughter of Benning T. Moore, himself one of the earliest in Georgia to set out a commercial peach orchard. Thus, in 1875 Samuel H. Rumph produced his Elberta peach.

So firm was the Elberta that in a trial shipment in 1875 Samuel shipped, un-iced, the fruit from these trees, packed in several one-third-bushel crates, consigning them to Arch Deacon & Company, New York City. The fruit arrived in good condition, and brought a fancy price of fifteen dollars per bushel. The 'Elberta' was not long in finding its place in the markets, although it was not marketed in any volume until 1880, when testing and propagation by budding were complete.

Samuel had proceeded to bud the Elberta extensively into his nursery stock and soon had a large growing orchard of the new peach. The "Willow Lake Nursery," was established due to the great demand for Elberta trees. It is a peculiarity of the Elberta that it has adapted itself to all soils and climates, from the Gulf to the Great Lakes, the Atlantic to the Pacific, and there was not a commercial peach orchard in the United States where the Elberta was not largely represented.

S.H. Rumph also contributed to the success of the new peach industry with the design of a box on casters which held six crates of peaches plus ice. These were loaded in box cars, shipped to port and loaded on coastwise steamers for New York. He later conceived the idea of a railcar that would haul many crates of peaches with ice bunkers at each end. This he turned over to the railroads for development without asking a royalty. It is indicative of the unselfish character of the man that he gave these ideas to the world, never taking out patents on his models. With this development peach growing expanded rapidly in Middle Georgia. The first considerable volume of Elbertas on the New York market created a sensation with their color, size and quality. Elberta was the most widely planted of any variety ever introduced, being grown in every peach producing area of the world.

Samuel's efforts to make fruit growing a commercial industry were initially laughed at, but his success attracted others, and soon his friends and relations joined in the enterprise, to be followed later by a host of others. With the introduction of the Elberta, an "attractive peach with good carrying qualities," he'd solidified a new industry in Georgia, and in the South.

In the early 1800's, Macon County had begun its reputation as a fruit center. But certainly the innovations of Samuel H. Rumph gave the county a presence in peach production that stands today. Samuel's contribution was not to be the only one to come from the Rumph family. An uncle, Lewis A. Rumph introduced the Belle of Georgia, which he named for Mrs. Belle Hall, mother of Mrs. J. N. Neel of Macon. Both the Elberta and the Georgia Belle are reported as coming from seeds of Chinese Cling. In 1886, another Marshallville citizen, Eugene Hiley, made a contribution to the growth of the peach industry by introducing the Hiley Belle. The Elberta, Georgia Belle and Hiley Belle were heavily planted throughout the middle Georgia region for several decades.